How I got to spend Christmas in Kajaani

Finland is the land of 1,000 lakes, with endless acres of forests to explore, a sun that never sets in the summer, and one heck of a food scene. Now, you won’t hear the locals bragging about these things. As with the other Nordic cultures, the Finns are slow to boast and quick to critique themselves. Once they’ve warmed up to you though, they have beautiful smiles.

It’s become one of my favorite countries to visit, a home away from home. This time, I’m going somewhere new: Kajaani, a city far to the north. But first, I’ll stop over in Helsinki.

As usual, Helsinki-Vantaa (HEL) is too breezy to navigate. I limp off the plane, walk to baggage claim, and head to the ticket machine to buy my travel pass while I wait for my luggage. There is a group of Asians struggling at the machine, so I go to offer help. There is a minute of fumbling while we try to agree on what language to speak, but between our phones and our broken understanding of one another, me manage. (Thank you, technology and free airport Wi-Fi.)

Now it’s my turn to decide between several options:

Normally, I struggle with the math to make this decision. The one-way will take me to the center and home if I go straight there, but what if we stop to wander? Are we going to hop several places? It’s easy this time though. I’ll be heading back to the airport at 04:30 tomorrow, so a 24-hour region it is.
(For those traveling to Finland: buy from a ticket machine before using transport. You’ll save time and money by doing this.)

Antti greets me and my luggage at the doors and we follow the huge green sign that points us to the train station. The 30 minutes from HEL to Helsinki goes quickly, and after stashing my bags in the belly of Central Station (where we ran into the same group I’d helped at the airport, eep!), we go to take in the sights and maybe hit up a Christmas market. 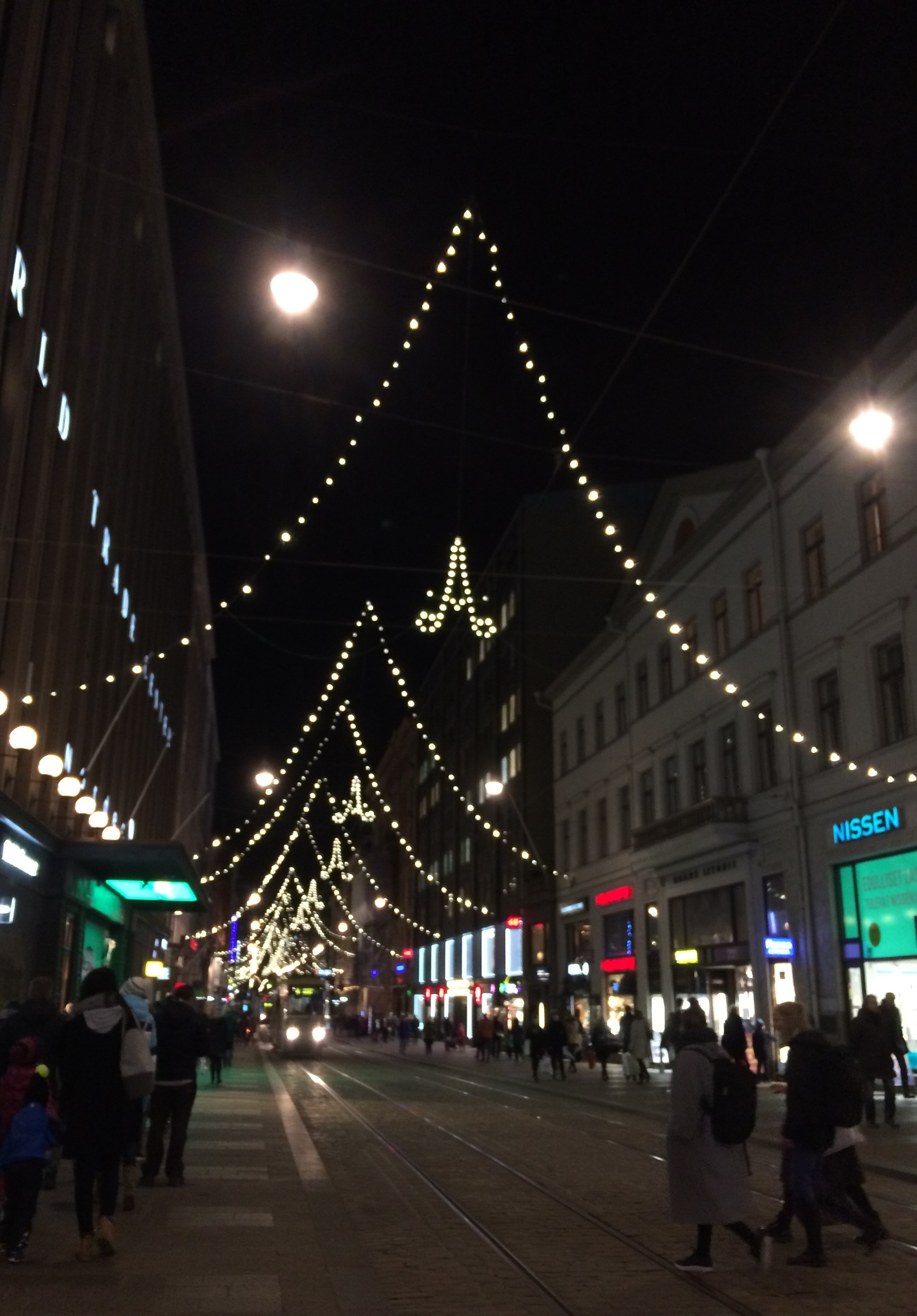 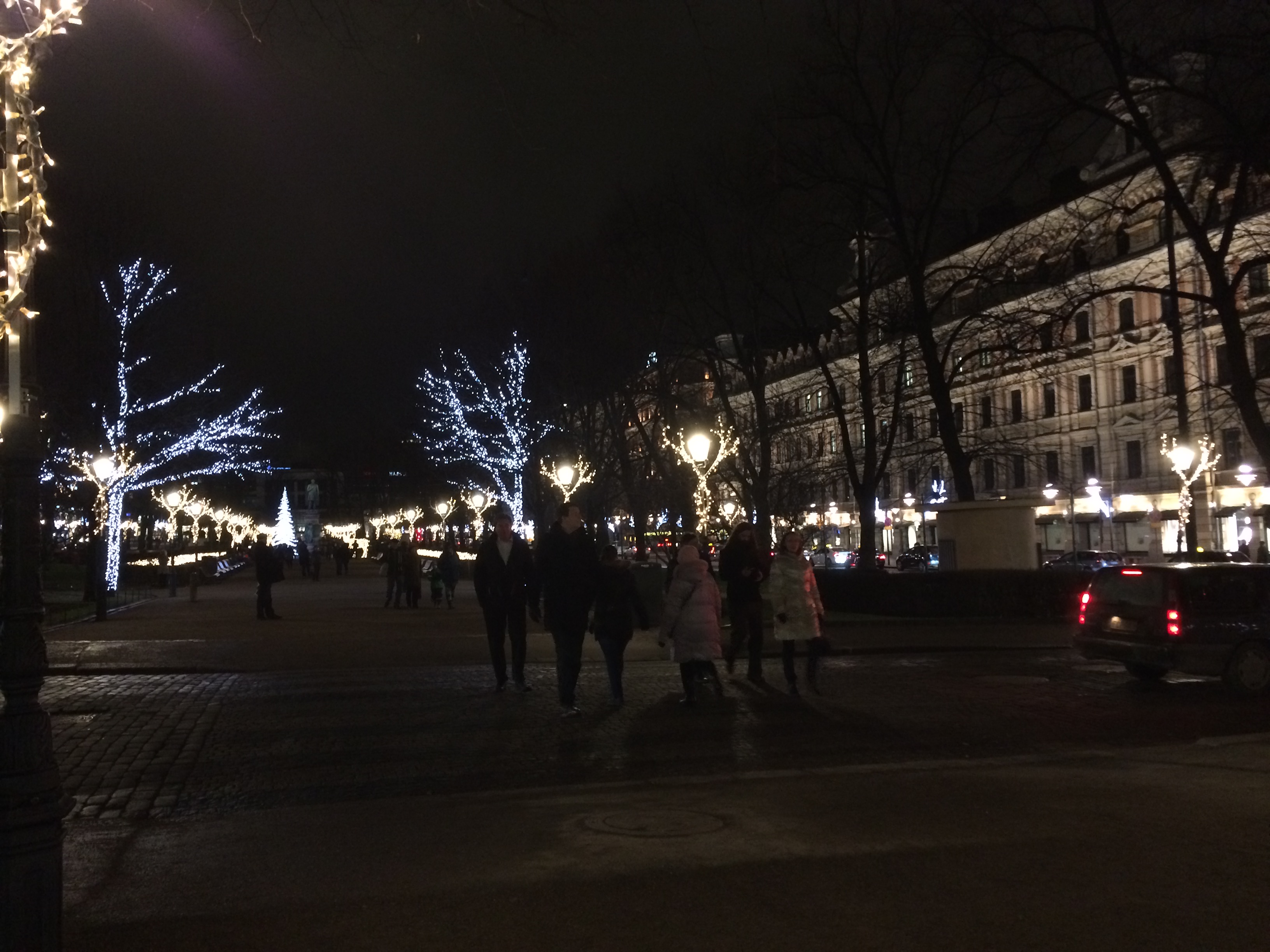 Try the pine-flavored glöggi if you get a chance. It’s an experience, and the warmth feels good in your hands. The temperature is about 34°F, but it’s the coastal winds that really gets you.

22:00, and time to turn in. Things close up early in the winter here, and we have a plane to catch tomorrow.

By 04:30, we’re on the bus to the airport and Kajaani. It’s filled with the late-night party-goers catching the first bus home, and they are all more lively than those of us with suitcases. One by one, they laugh their way off the bus. Some stop at street corners, some stop at the entrances of neighborhoods, and others stop under overpasses. Where are their homes?

05:00, we’re at HEL again. By 5:15, we’ve dropped off our luggage, gone through security, and are sitting at our gate, leaving us 1.15 hrs to contemplate the screen flashing between Jyväskylä (a city between Helsinki and Kajaani) and Kajaani. This is sort of terrible for two worriers. This was a nonstop flight, right? Is the gate wrong? Has our flight changed? Are the Jyväskylä passengers going to parachute down as we fly over their city?
Turns out, nothing that exciting. The flight will first stop in Kajaani, then in Jyväskylä on its way back to Helsinki. The flight is also uneventful, which is the best kind of flight.

We land at 07:30, which is too early for my brain to handle the traditional Christmas setup at Kajaani’s airport…but not too early for me to take a picture for my brothers.

Antti’s mother picks us up, and things are a bit of a whirlwind. December 23 is Christmas Eve for Finland. They keep the same dates, of course, but all of their festivities happen on December 24th, which means that we need to do the last bit of grocery shopping and all of the food prep for tomorrow. I managed to sneak out in the evening though: 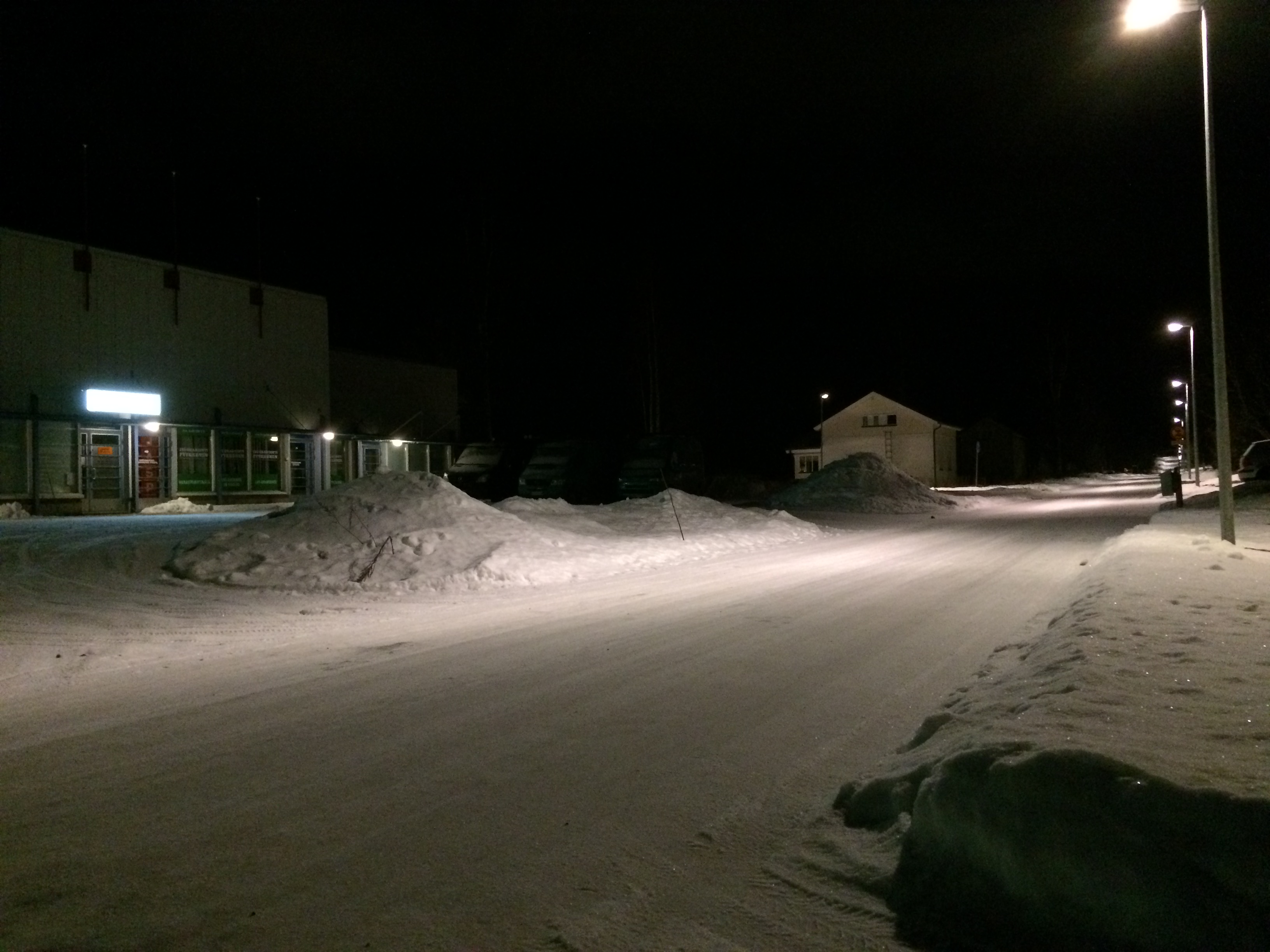 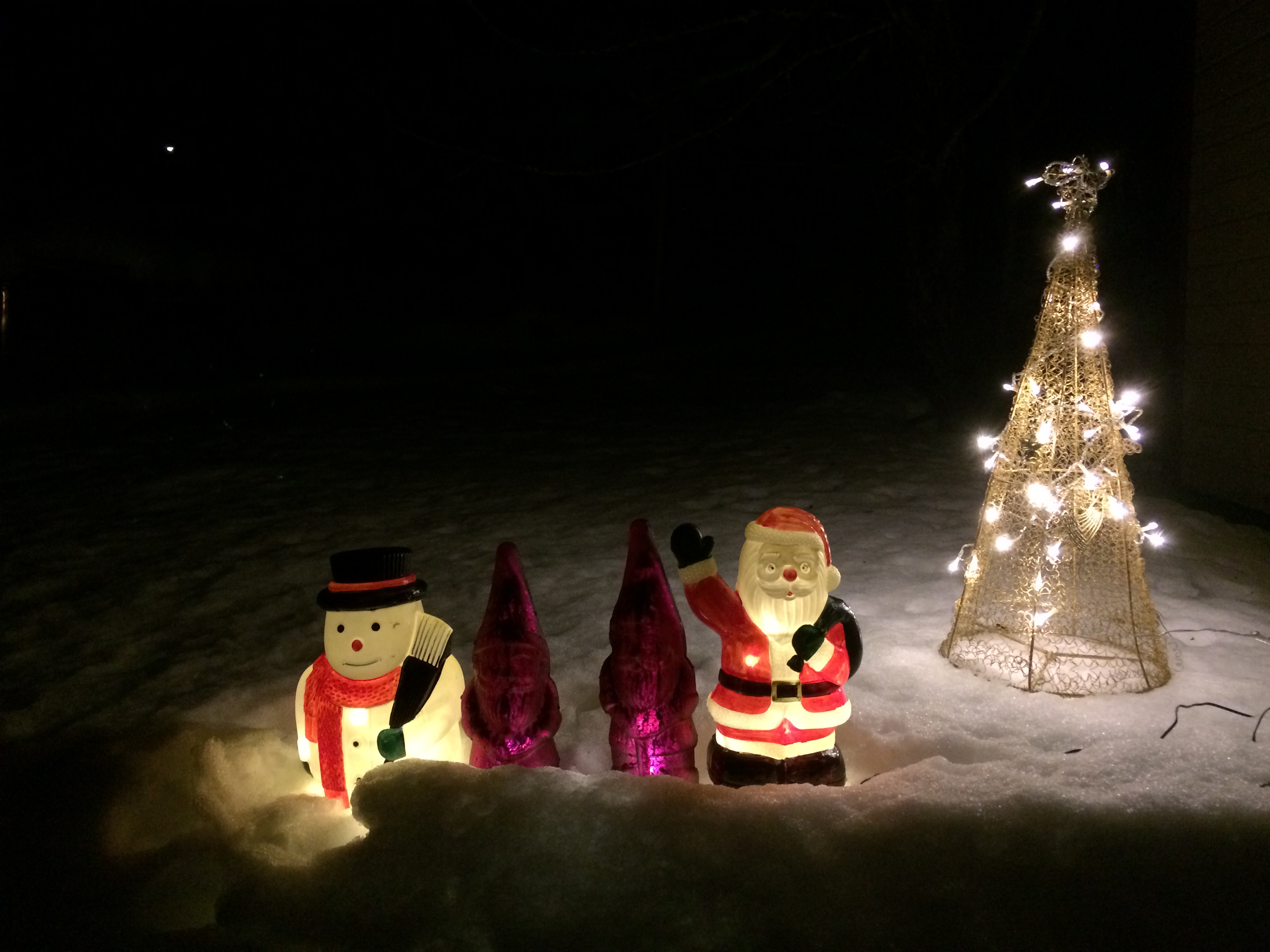 Welcome to the land of snow!

These ornaments would be buried by the time we left.

The house smells of delicious food baking in the oven…which means it’s time to see the neighbourhood before all the guests get here. Antti takes me through his childhood. 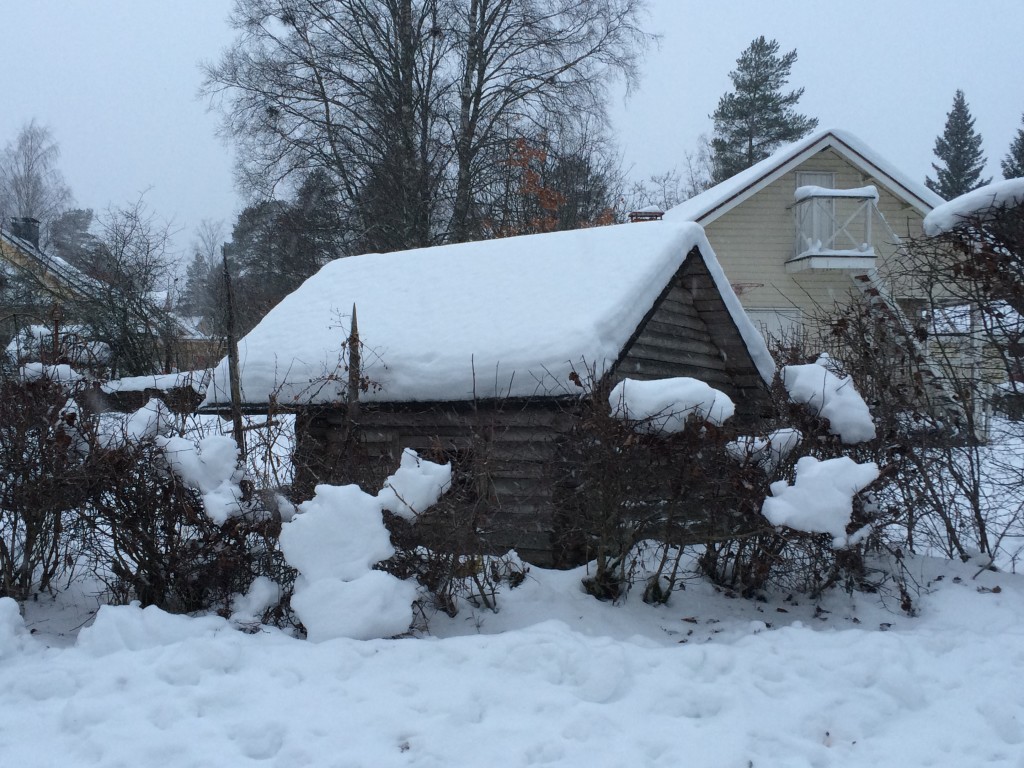 He’s been telling me stories for a year and a half now, so it was amazing to be there—and stomp around in snow for the first time of my life. 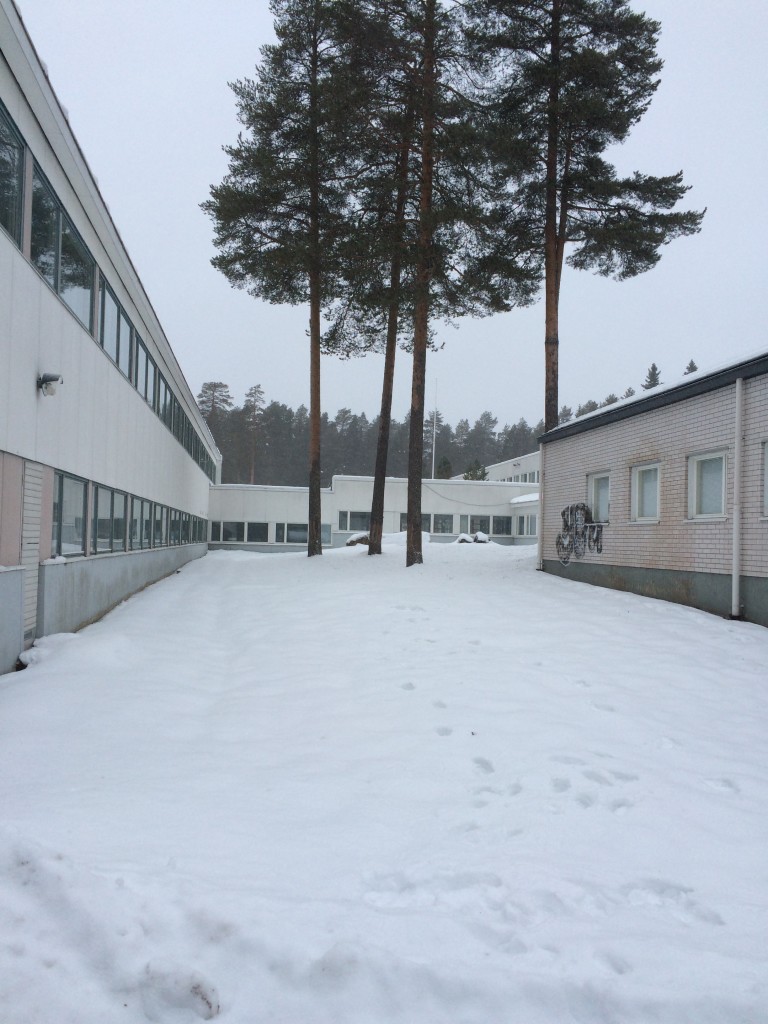 Oh, time to head back, feast, entertain children and adults, open presents, and consume massive amounts of wine and cheese. 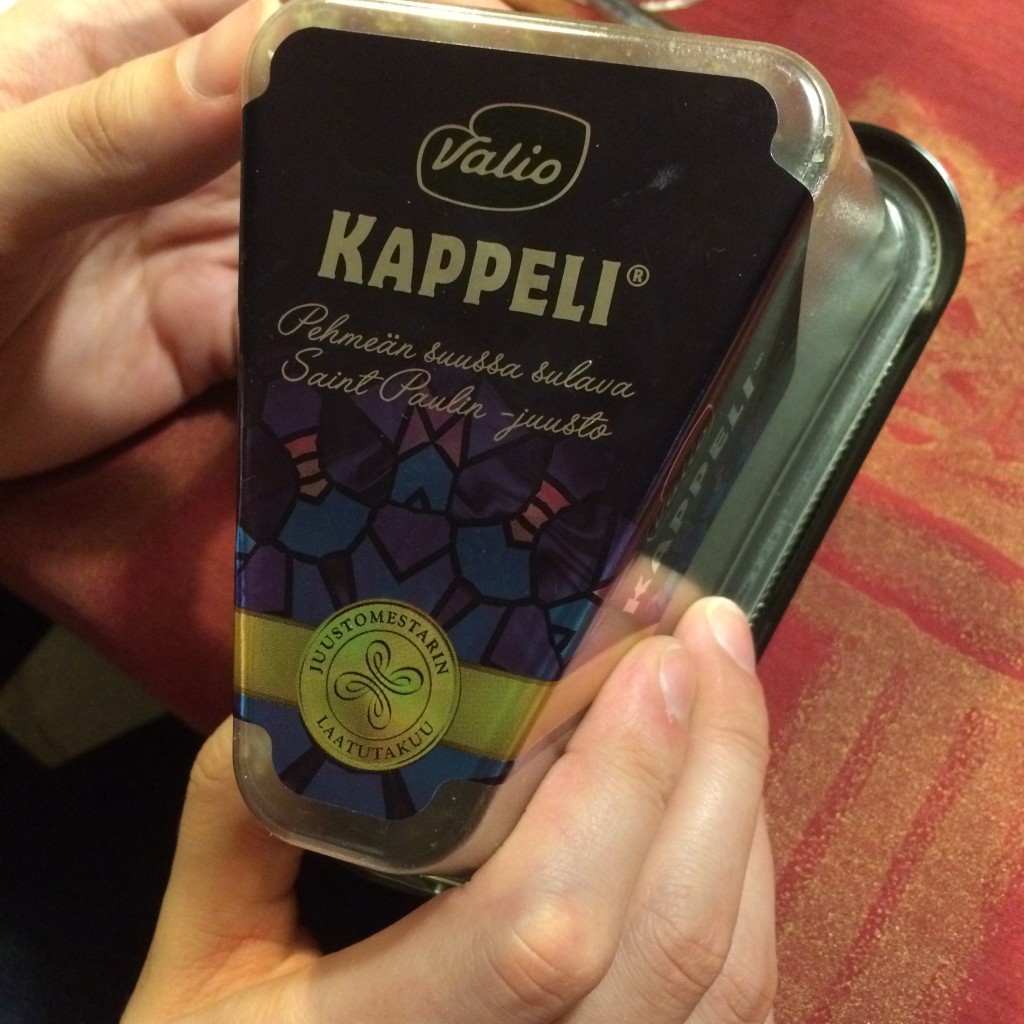 So much eating, talking, and entertaining. Even the children are looking tired. Wait, no, they were just playing a game.

Oh, good lord, finally a day to rest. The cooking is done, the cleaning is finished, and the guests are gone. This means it’s a perfect day to go to the cabins.

We drive north with Antti’s stepfather, moving from a winter postcard and into to a wonderland. Tapani loads us onto the snowmobile, and we drive across the lake, somehow navigating through complete whiteness. There are no markers, and little visibility, but Tapani gets us there safely. 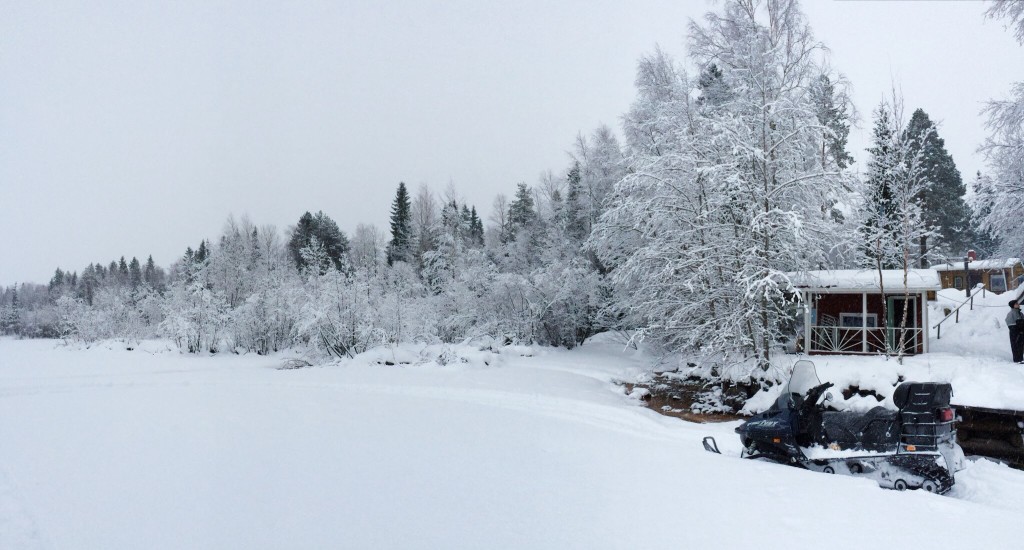 He then laughed at me for running around like a kid and, while getting a fire started for sausages, told us to go wander around while he got some chores done. 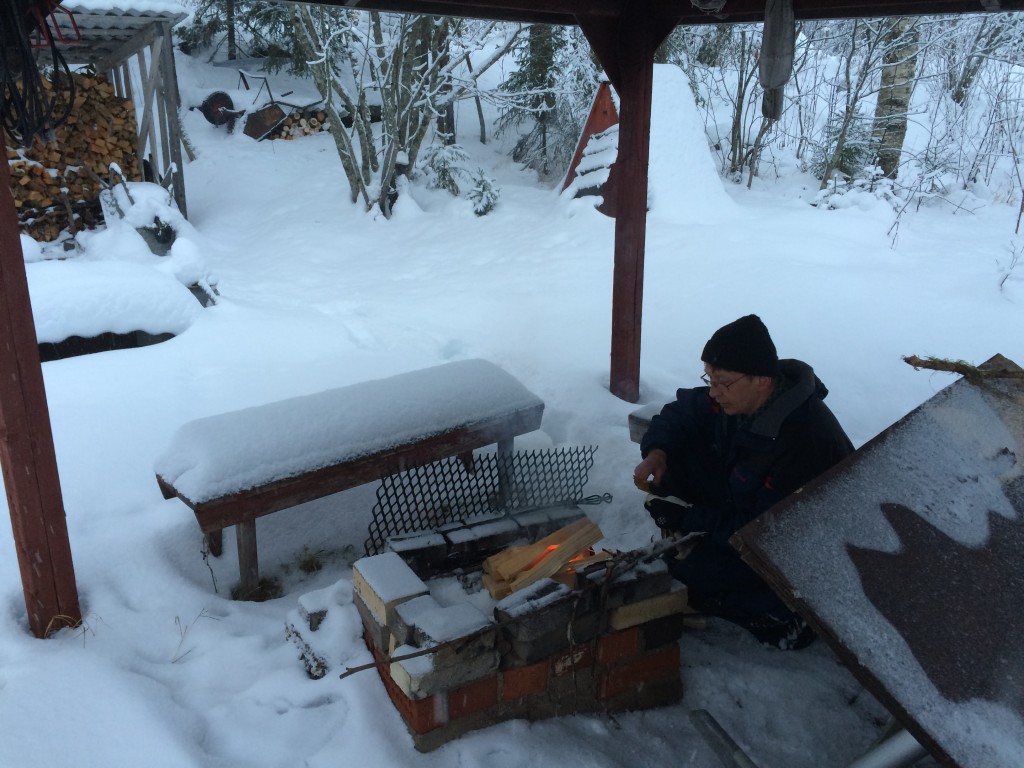 I’m not about to protest that. I feel like Jack Skellington in Christmastown. What’s this?! 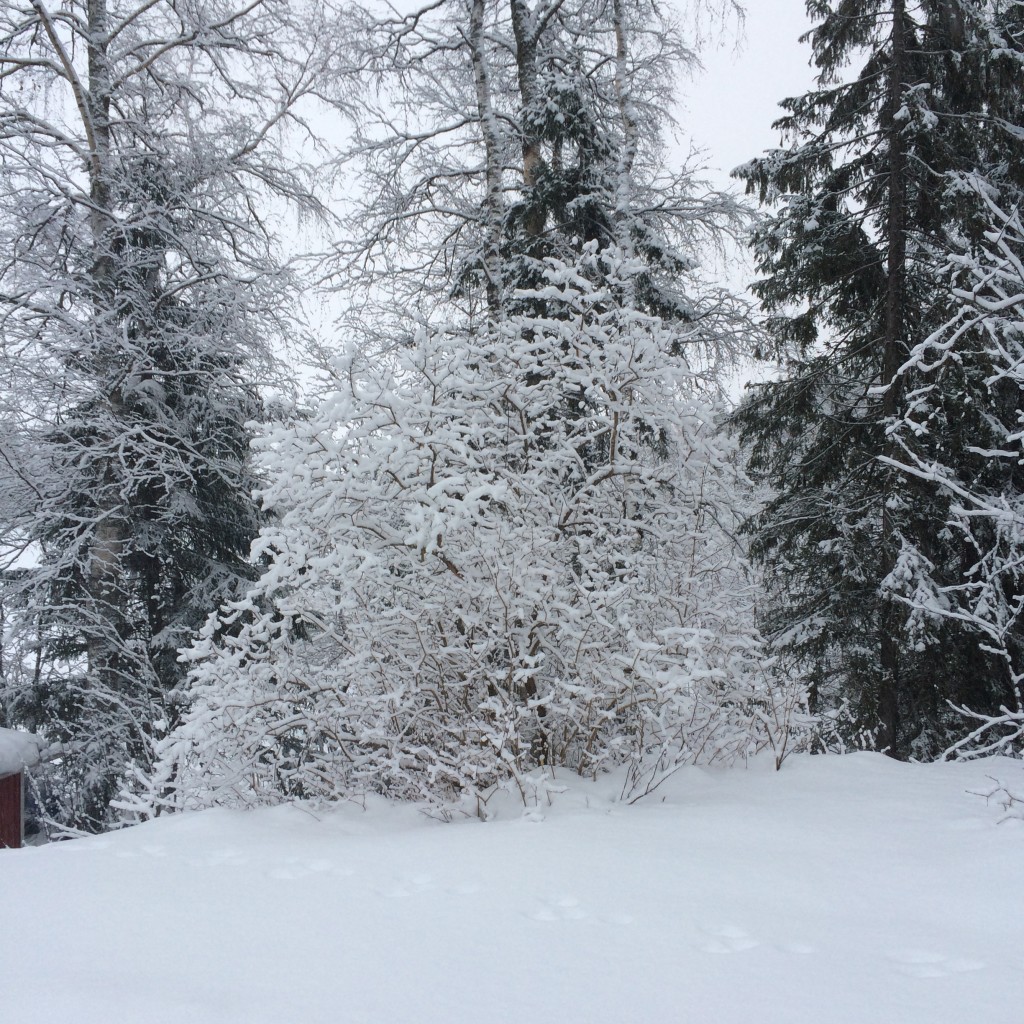 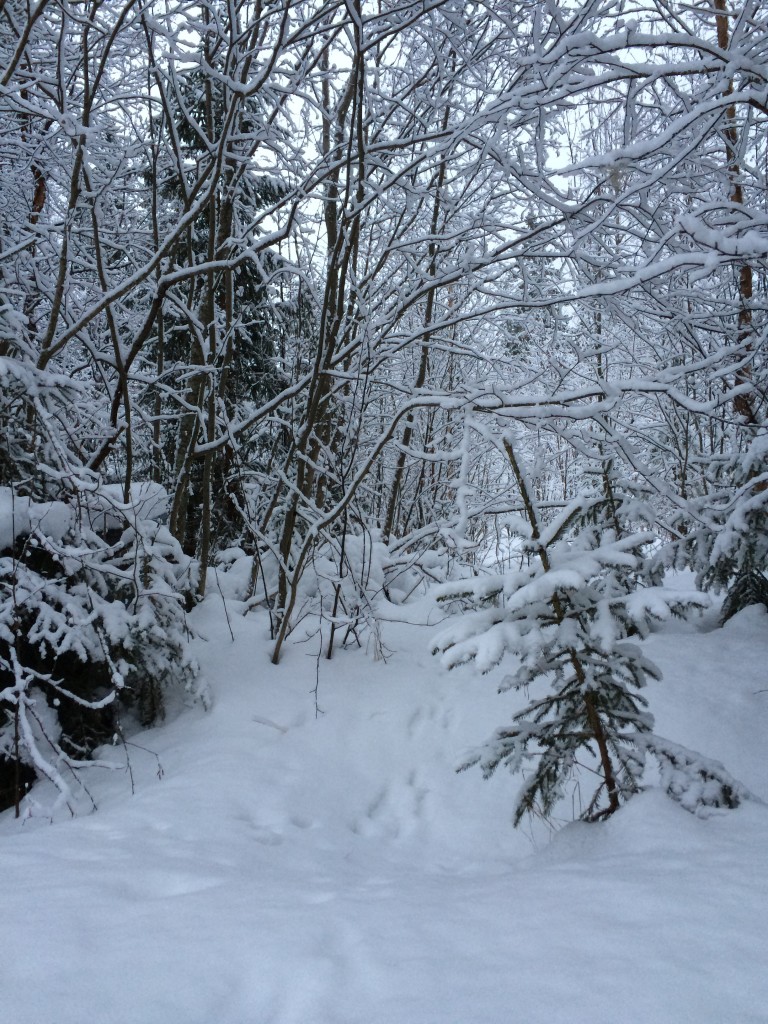 Oh, rabbit tracks into the woods? Let’s go! After that, a trip on the lake, perhaps? We have to make it fast though, because it gets dark quickly here, and we promised to be home in time to go shopping with Antti’s little sister, Aino. 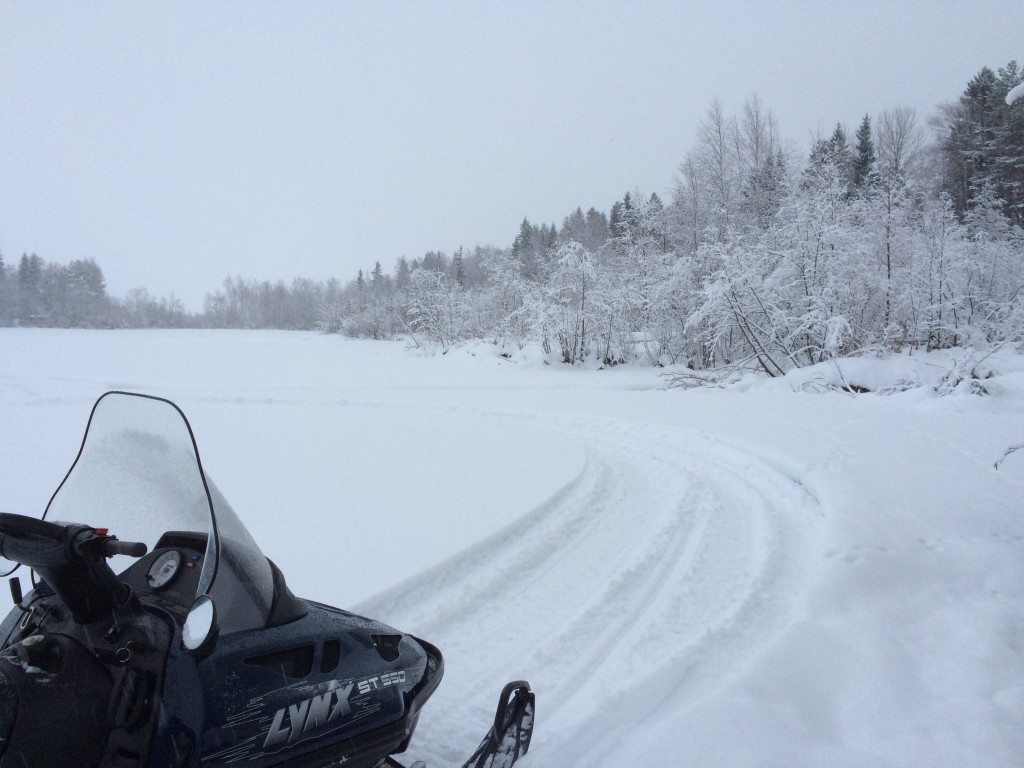 It’s beautiful, cold, and hauntingly serene despite the low roar of the snowmobile’s engine, which acts as white noise. I feel like I could stay here forever and listen to the nothing. However, there are people to see and promises to be kept.

This evening, we will see three more things before it is time to turn in:
A church with a painting of hell that made parishioners faint, where an emperor stayed in the stable and the dead were buried amongst the trees. 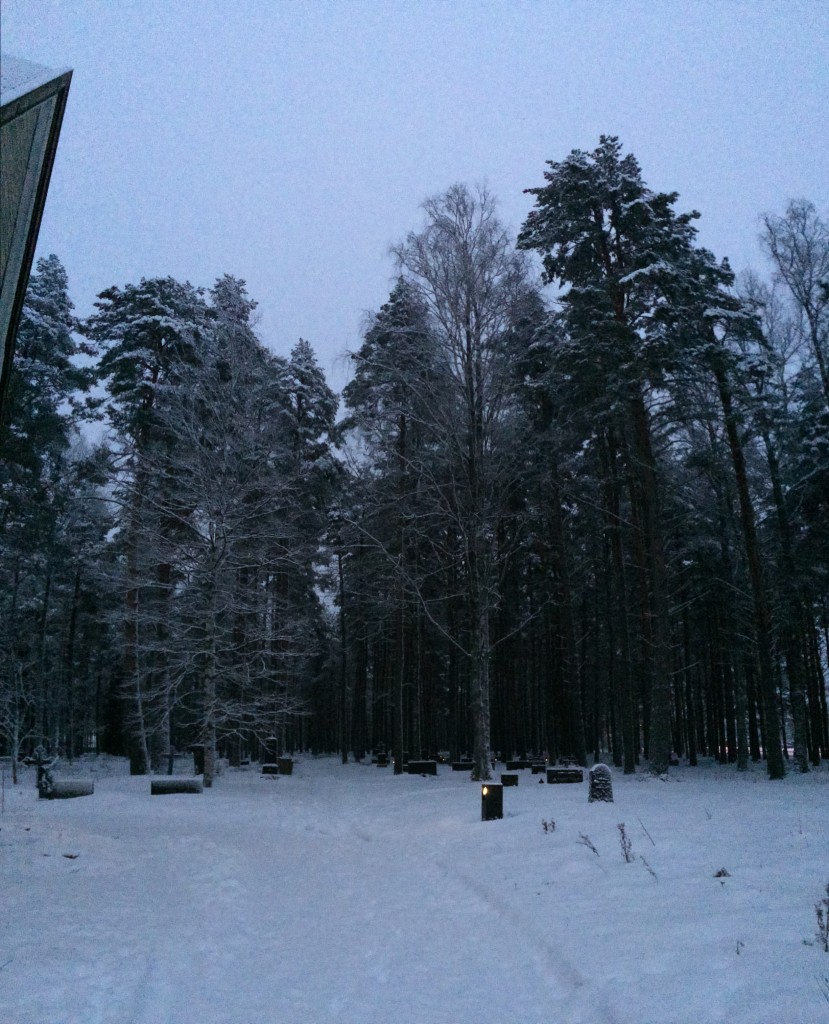 The ruins of Kajaani Castle, which once defended the city. Today, it is a hazard of stone with the occasional educational placard (and some wickedly slippery, icy steps).

The town’s main church, which was a particularly lovely sight. 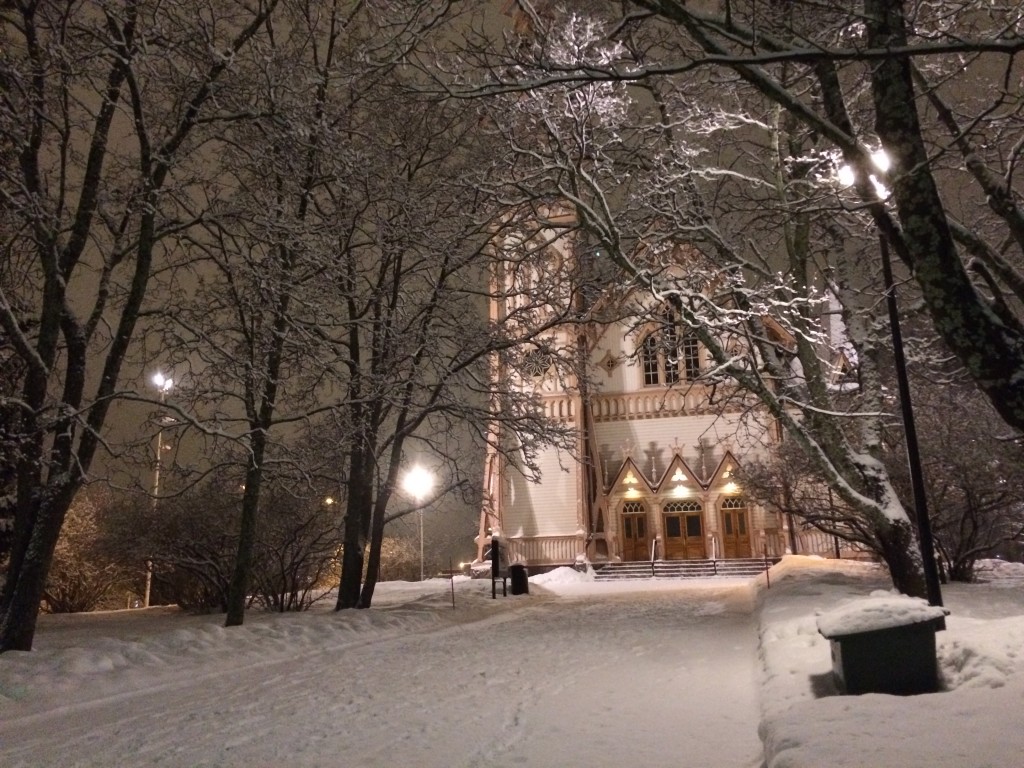 Now, it’s time to go back home. We have another early flight tomorrow.